The only part of my trip that I planned ahead of time was arriving in the south of Thailand in time for Christmas Eve. I knew that if I wanted to experience the best New Years party in the world, a visit to the island of Koh Phangan was necessary. Little did I know that I would end up spending three weeks on the island and attend every moon party that exists. My first taste of the moon parties was a Full Moon Party on Christmas Eve. This 8,000 or so person party takes place on Had Rin Beach where people from all around the world paint their bodies in AV paint, drink litres of alcohol from buckets and dance even after the sun comes up.  Although I didn’t enjoy the fact that people were throwing trash all over the beach and pissing directly behind me as I enjoyed putting my feet in the ocean waves, it was a really good party. The music was great, everyone was in a great mood and there was no violence between the many drunk people. Also,to my surprise, the beach was cleaned up very well the next morning.

The Half Moon Party took place in the jungle at a smaller venue in Ban Tai. The location of the party is only for holding Half-Moon parties which happens twice a month and brings in about 2000 people each time. The outdoor club is designed to be very psychedelic using UV lights and ornaments and kaleidoscopic projection videos. The crowd is made up of dedicated party goers and trance lovers from all over the globe as it cost 500 baht ($16 CAD) to get in where entrance to the Full Moon party was free. This was definitely a more intimate experience and personally more preferable than the Full Moon parties.

New Years celebrations in Koh Phangan is a completely different level of partying. The party was held at the same location as the Full Moon Parties but with 10,000 + people, crazy fire shows and fire play, amazing fireworks, ridiculous beats pumping from 30 feet towers of speakers and many, many cheap alcoholic buckets. The best part of the night was when the entire crowd shouted out the New Years countdown. I have never witnessed that amount of people doing something unanimously. We were one very loud, very energetic, and very enthusiastic crowd. What I also found amazing, was the absence of security, when at almost every moment someone could potentionally get really hurt. An interesting pastime was hanging outside the first aid clinic to watch the many intoxicated people walk in with severe cuts and wounds; which is why I would highly suggest wearing shoes and monitoring your bucket consumption. 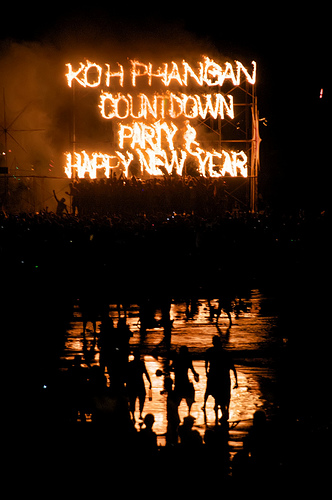 If you’re looking for more space to move and dance around then the Jungle Experience Party is for you. Held around the same area in Ban Tai as the Half Moon Party, the jungle party brings in a couple hundred progressive and psychedelic trance lovers. To get there, you have to trek (or if your less adventurous, you can take a cab) through treturous roads, deep in the jungle, in the middle of no where to a location where no one can complain about noise levels. To be honest, there isn’t much of a difference between this party and the others, besides the fact that is much smaller and people are pissing in bushes rather than the ocean.

The Black Moon Culture Party in Koh Phangan is held at the end of each month at Mac Bay Resort in Ban Tai. Fortunetly, when I was on Kho Phangan, the party was held at the resort right beside the place I was staying at. Unfortunately, the party wasn’t that great and definitely not worth spending 500 baht on the entrance fee. Instead, we partied at our beach hut where the music could be heard loud and clear throughout the night.

Overall, the famous Thailand parties were a blast. The music was great, the energy was high and the location was ideal. If you are looking to spend your travels partying it up, then I highly suggest going to Koh Phangan because there is never a dull moment. Even the moon parties are followed by an after party. You really don’t get a break on this island, but at the same time it’s well worth a visit as there isn’t anything else quite like it.

Watch Our Latest Video
HI EVERYONE! THIS IS US. For anyone new here, I t