You can’t change the weather when you travel, but you can change your mindset. 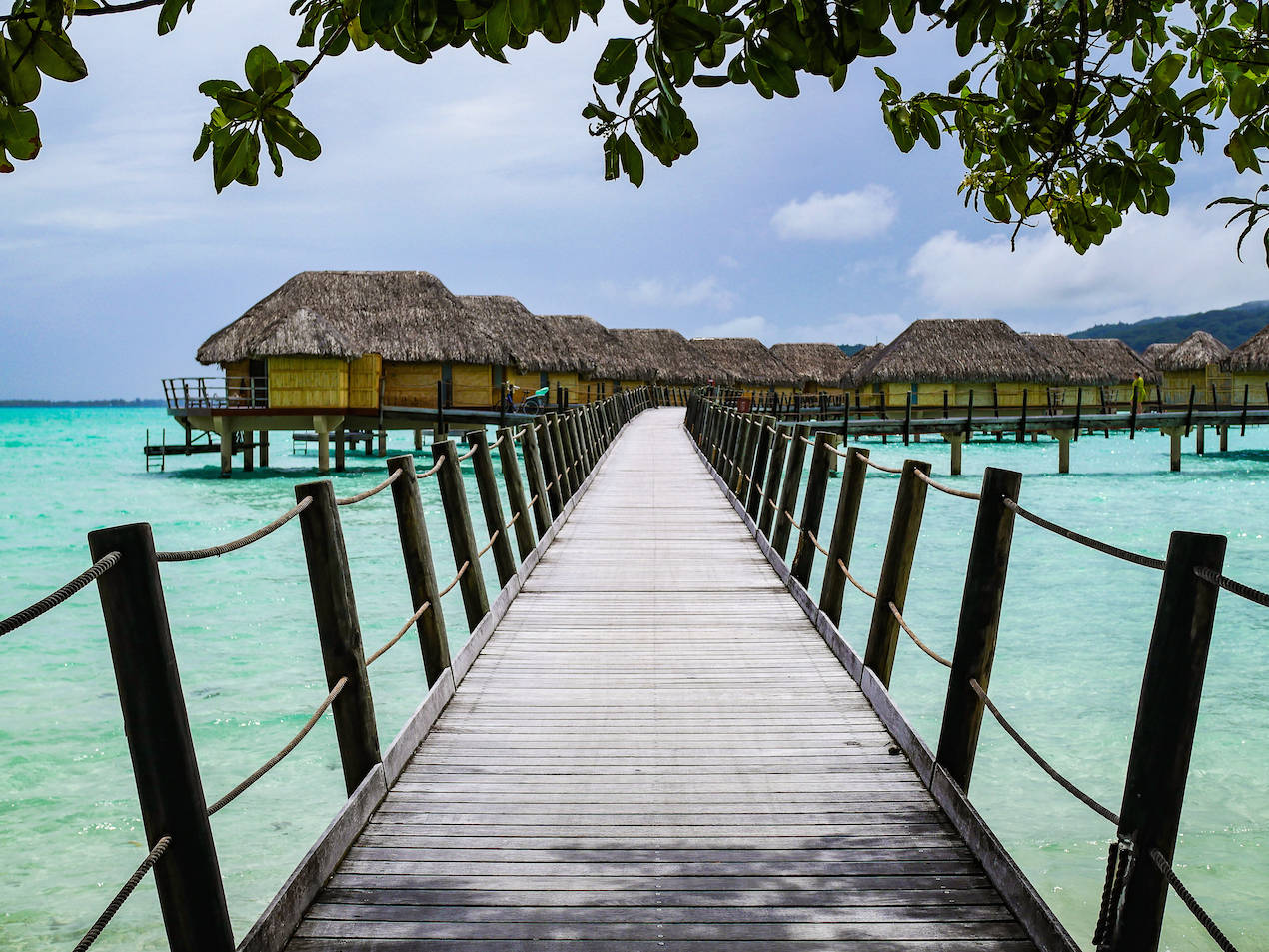 “Tahiti has no official rainy season.”

That’s what one article I read after my eight-day trip to French Polynesia said. If the author of the article was not blatantly wrong, then I certainly was for going to Tahiti in February. It rained the entire time.

It wasn’t exactly a surprise. When I checked the weather forecast as I was packing for my trip, a lightning bolt appeared for each day (with an average low temperature of 79F). As a precaution, I packed a thin rain shell. My bathing suit barely saw the light of day, but I wore that jacket eight days in a row.

Every afternoon, I went outside on the deck of my bungalow and stared straight up at the sky. Every time, I saw the sun almost poking through the clouds. “The sun is coming! The sun is coming!” I shouted, nearly choking on a mouthful of mahi-mahi. “Apply the SPF!”

It never poked through.

Finally, for one hour, the sun came out, and I got a glimpse of Tahiti in all its postcard glory, sparkly teal water and all. I raced around the resort to procure a week’s worth of winning pictures (to convince everyone at home that Tahiti is just as idyllic as they imagine it to be, and has no official rainy season).

I celebrated the burst of blue sky with a snorkeling excursion to the nearby reef.

Despite having responsibly lathered myself in so-called waterproof sunscreen, I still managed to get brutally sunburned on my back, to my significant discomfort and self-loathing. Who gets seared worse than a tuna steak during literally the only hour in an eight-day stretch of time when the sun decides to shine?

To take my mind off my tender trapeziuses, I visited a pearl farm. I learned all about the magic of oysters and the nuanced process of diving for and grafting pearls (a young French women with a stunning strand of saltwater pearls on her wrist sent me back to my bungalow dreaming about mussel implants, mantle incisions, secretions, and nuclei; I slept like a rock).

Now you might be wondering, what do oysters have to do with the weather? I’ll tell you, apparently nothing, which is why touring Pearltopia was the perfect way to kill an overcast afternoon.

Before boating back to my motu (islet), I stopped at a vanilla plantation. That’s when it occurred to me. For the same amount of effort we expend complaining about incoming low-pressure systems and lousy lighting for Insta-glam shots, we could be doing something cool, like sniffing a jar of organic vanilla beans fermenting in vodka.

This epiphany was not the only thing I took away from the plantation. I also picked up two vials of “Huile de Tamanu,” a miraculous skin-soothing nut oil, which I practically bathed in to assuage my burns for the remainder of my vacation.

I shudder to imagine how devastated I would have been to have visited the plantation before going snorkeling, and to have left sans-Tamanu, only to get scorched the following day. No amount of rain could knock those lucky stars (beans?) out of alignment.

Having had quite enough of Tahiti, I flew from Raiatea to Papeete to head home to Seattle via Los Angeles. The debacle I experienced in Papeete’s Fa’a’ā International Airport served as one final reminder of the importance of finding humour in otherwise maddening scenarios…

A storm had apparently fried the computer at the gate, forcing the boarding process to be completed manually. One pathetic Air Tahiti intern, with a bowl-cut and a flower shirt, checked off seat numbers one by one on a diagram of the plane.

As a horde of soggy tourists funnelled toward this brave airline aide, green ponchos were distributed among them for protection on the tarmac. The moment these garbage-bagged passengers crossed through the double doors of the terminal to the outdoor boarding zone, their ponchos flapped uncontrollably, nearly strangling them.

As I watched the boarding process transpire in this ridiculous fashion, waiting for my turn, something switched inside of me. I was able to see the extremely frustrating situation as the hilarious spectacle it was. I started cracking up.

Imagine the absurdity: Everyone wanted desperately to leave Tahiti, but in order to do so they had to pass one final test of patience. As a reward for having their ticket ripped after a two-hour delay, they had to step outside where they then appeared to be skydiving with a broken parachute in one of those latex bodysuits Missy Elliott used to wear. I swear, Missy herself must have come to Tahiti in February before famously professing, “I can’t stand the rain.”

Obviously, I wanted it to be sunny on my Tahitian getaway. I hope the sun shines every day of my life, but I’ll never again expect that it will. Expectations are the root of all disappointment, and it is the traveler’s responsibility not to succumb to them.

If we attach our happiness to random occurrences, our happiness becomes random as well. Only by detaching from external circumstances and outcomes beyond our control can we truly enjoy a trip (or, for that matter, life). Happiness is a choice, not a forecast.

So next time you see lightning bolts approaching, especially in so-called paradise, remember that the weather is not the problem. Your expectations about the weather, the importance you assign to it, and the attitude you adopt in spite of it, are all that matters. That, plus waterproof sunscreen, organic vanilla, extra umbrellas and the occasional smile.

Have you had bad weather during a trip?

How did you deal with it?

Watch Our Latest Video
I'M SO EXCITED ABOUT THIS STYLE OF CONTENT... I h

*GIVEAWAY ALERT* HOW TO STILL SEE FAMILY THIS HOLI